ABT on tour in Brisbane: Swan Lake

American Ballet Theatre (ABT) bring Swan Lake and The Three Masterpieces to Brisbane as part of their long-awaited Australian tour.

When American Ballet Theatre (ABT) announced that they were bringing Swan Lake to Brisbane in September 2014, I was over the moon. I’d never seen Swan Lake live on stage and I really wanted  to see it performed by either Mariinsky or ABT. Just as I accepted the fact that I would have to travel overseas for this to happen, ABT announced their tour. Oh the joy! I waited until the cast was announced before I bought the tickets because I wanted to make sure I got a chance to see my favourite dancer (Marcelo Gomes, Daniil Simkin, Gillian Murphy). I ended up buying tickets to both Swan Lake and Three Masterpieces, took two days off work and flew over from Melbourne. Because true love knows no bounds. This is a review of sorts – I wanted to recount my experience and point out some of my favourite moments.

I saw the performance on the 4th of September. Odette/Odile was danced by Paloma Herrera, Siegfried by Cory Stearns. I sat on the second balcony, front and centre – very good seats, except I’m afraid of heights.

Loved it. This was my first experience of a full-scale ballet with a live orchestra and it was thoroughly overwhelming. I may or may not have cried a little…

There was one moment that really stayed with me. At the end of Act 2, after Siegfried declares his love for Odette and vows to marry her, the lovers part at the break of dawn as Von Rothbart’s magic forces Odette back into the form of a swan. I was curious to see this transformation. After all, the ballerina’s appearance at this moment isn’t altered in any way, so what’s the difference between Odette the swan and Odette the princess? I’m not sure what I expected, but the shift was staggering – Paloma looked as if all life left her. There was a turn and a jerk and suddenly the girl was gone and a bird fluttered in her place.

I loved Von Rothbart. I don’t really have a thing for bad guys, but Von Rothbart was too damn charming. Unfortunately, I lost the sheet with the cast names, so I don’t know who was responsible for the glorious performance that was so fun to watch. Von Rothbart was performed by two dancers – a slick, handsome manipulator and an evil green monster – the latter I found more comical than frightening. Von Rothbart shape-shifts several times during the ballet, and each change was done very smoothly (although I was temporarily blinded by the flash at the end of Act 3 – a climactic scene where Von Rothbart transforms in front of the court).

Odile is Von Rothbart’s daughter – an evil seductress who conspires with her father to turn the price from Odette in Act 3 – ballet’s ultimate bad girl. Paloma’s Odile, sexy and bold, held the court and the audience in thrall. Her every step oozed confidence, every look was direct and challenging – complete opposite of her sweet and fragile counterpart. There was one moment – a razor-sharp, unsupported arabesque which seemed to last forever – which left the audience reeling (I heard several loud exclamations on by balcony). Like everyone else in the audience, I was waiting to see the infamous thirty-two fouettes. I’ve only ever seen this move performed on film, but I saw it done so perfectly by Gillian Murphy that I was expecting something rapturous. To be honest, I wasn’t as impressed as I was expecting to be. I’m not sure why. Maybe my expectations were too high or maybe I’m not familiar enough with ballet to be able to appreciate certain things. One thing surprised me: I thought the idea was for the dancer to spin in one spot, but Paloma traveled forward – far and at a speed – finishing almost at the edge of the stage.

ABT Corps de Ballet was superb. Absolutely superb. Their discipline was especially obvious in the swan scenes – it seemed that the flock of twenty-six birds shared a single mind. Dance of the little swans was a blueprint of precision and balance. I can’t praise the corps highly enough!

I feel the need to touch on these because both were very beautiful (designed by Zack Brown). The costumes especially caught my eye. When the Queen swept across the great hall in Act 3, the crystals sawn into her dress danced with light, Odile’s crown appeared aflame, and the spot of crimson on Odette’s white chest – like a wound – added both a touch vulnerability and a warmth to her gentle image.

A spot of stalking and a glimpse backstage

I spent a bit of time hanging out in an around QPAC during the day hoping to catch a glimpse of the dancers. Gillian Murphy walked past me in the street once and I almost said hello but chickened out. I did manage to say a quick hi to Marcelo Gomes though. I resolved to wish him good luck for his performance in Tokyo (he was debuting in the role of the Swan/Stranger in Matthew Bourne’s Swan Lake in a week’s time), so I hung around the stage door until he came out (and then chased after him in high heels because I’m one classy lady).

Instagram was certainly helpful when it came to tracking the company’s movements. If you are interested in ballet, I highly recommend that you follow the dancers on Instagram.Some of them offer fantastic insight into the life backstage, in the wings, in the studios and on tour. I learnt a great deal about ballet by following some of these people.

A members of the corps, Stephanie Williams (wheresmytutu) gave a bit of a glimpse behind the scenes and shared the pain that comes with double-show days.

Daniil Simkin (daniil) is my favourite person to follow. Not only does he share the most interesting, funny and educational moments from the life backstage, he is also a very talented photographer. He is a great advocate of using social media to break the fourth wall, and following him is rewarding and fun. By the way he is the reason I became interested in ABT. 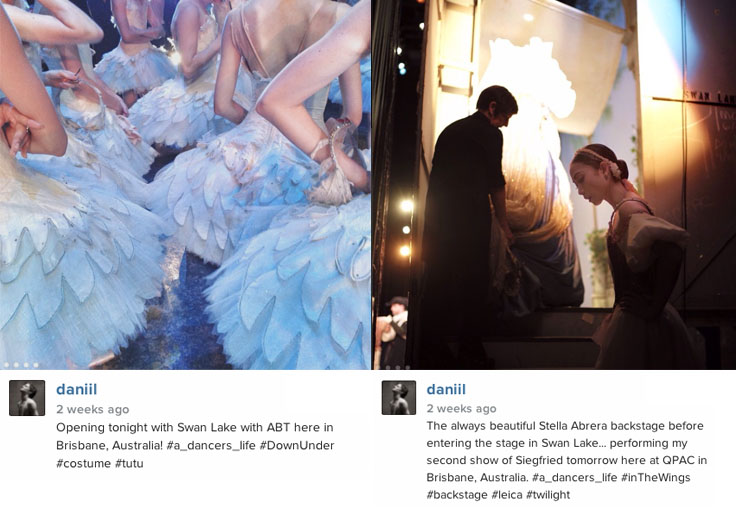 Misty Copeland (mistyonpointe) is not my favourite person to follow, as her newsfeed is mostly filled with endorsements and promotions. Interesting things can occasionally can crop up though.